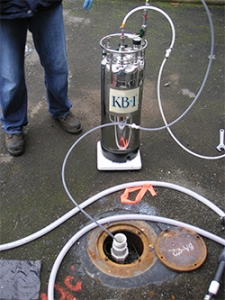 Site investigation activities performed in 1999 identified trichloroethene (TCE) concentrations greater than 100 mg/L in the primary source area and up to 1 mg/L in 2 other areas with low concentrations of cis-1,2-dichloroethene (cDCE) and vinyl chloride (VC). Source zone soils contained TCE concentrations as high as 1,960 mg/Kg, which acted as an ongoing source of TCE to groundwater.

Targeted injection of steam, pump & treat, and bioremediation technologies were the combined remedial actions used at the Site. In 2001, source area treatment was performed using steam injection coupled with dual-phase extraction of heated groundwater and vapor. A groundwater pump and treat system was operated from 2000 to 2007 at the north property to prevent further offsite migration of TCE in groundwater. Enhanced bioremediation using electron donor addition and KB-1® bioaugmentation was used in the source areas and for a biotreatment barrier located near the property. The bioremediation remedy was pilot tested in 2005 followed by full scale operations in 2007 and 2008.

Following bioremediation in the source area, TCE concentrations decreased to less than 2 µg/L in all wells along with corresponding increases in degradation products indicating reductive dechlorination of cDCE and VC was occurring. Groundwater TCE concentrations decreased to less than 1 µg/L in samples collected from downgradient wells. Degradation products were also dechlorinated to less than regulatory limits with corresponding increases in ethene. Groundwater temperatures following the steam injection were optimal (20 to 30 oC) for bioremediation, increasing the rates of dechlorination and shortening the time to reach cleanup goals.