Stable Isotopes are “light” and “heavy” atoms of the same element

Stable isotopes are atoms of an element that contain the same number of protons but different numbers of neutrons in their nucleus (e.g., the light isotope of carbon (12C) contains 6 neutrons and 6 protons, whereas the heavy isotope (13C) contains 7 neutrons and 6 protons, Fig. 1). In nature, stable isotopes occur in a relatively constant ratio (e.g., 12C = 98.93%, 13C = 1.07%; Protonium (1H) = 99.9885%, Deuterium (D; 2H) = 0.0115%). However, various chemical, physical and biological processes can lead to a minimal (but easily measurable) shift in the ratio of heavy and light isotopes (the isotope signature) in a substance. 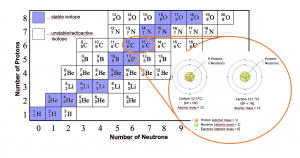 Overview on isotopes of chemical elements ranging from hydrogen to oxygen. The enlarged excerpt shows a simple atomic model of the two stable carbon isotopes with the derivation of their atomic masses based on the different numbers of neutrons. P – protons, N – neutrons.

The quotient between the heavy and the light isotope is called isotope ratio or isotope signature (e.g., 13C/12C, 2H/1H), which is expressed as delta notation (δ sample) relative to an international standard. Reference standards are measured repeatedly during analysis, thus achieving a high level of measurement accuracy and sensitivity. In Compound Specific Isotope Analysis (CSIA), isotope ratios of individual compounds are determined from complex chemical mixtures in environmental samples. First, the components are separated chromatographically and then combusted into simple molecules, such as carbon dioxide. The combustion products are ionized and separated based on molecular weight in a high vacuum magnetic field. Specialized analytical systems, such as gas chromatography – isotope ratio mass spectrometers (GC-IRMS, schematic shown below) and/or liquid chromatography – isotope ratio mass spectrometers (LC-IRMS) are required to perform these measurements. 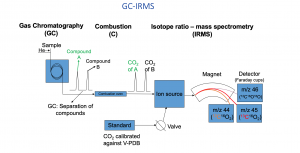 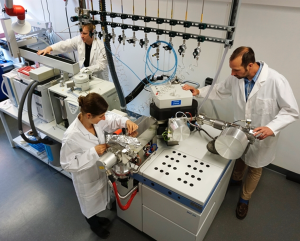 Isotope Fractionation due to Pollutant Degradation

(Bio)chemical reactions lead to a fractionation of stable isotopes, i.e., a change in δ-values. This isotope fractionation is caused by a kinetic isotope effect (KIE). KIEs depend on rate differences for the cleavage of chemical bonds substituted by compounds only consisting of light isotopes (e.g., 12C, 1H) or bearing a heavy isotope (e.g., 13C, 2H). Due to the preferential transformation of the lighter isotope species, compounds bearing a heavy isotope, especially in the reactive position, accumulate in the residual fraction of the reactant (normal isotope effect).

For conventional GC- and LC-IRMS analysis, organic compounds are converted to a measuring gas, for which the isotope ratio is determined (e.g., CO2 for CSIA of carbon, H2 for CSIA of hydrogen). Due to the total conversion to a measuring gas, position-specific changes in the isotope composition of a target compound cannot be ascertained. Therefore, the extent of measurable stable isotope fractionation decreases with an increasing number of atoms located in nonreactive entities of a molecule. The smaller the pollutant molecule to be broken down, the greater the measurable isotope fractionation. For large molecules (> 12 carbon atoms), isotope fractionation is therefore usually below the detection limit of GC-IRMS or LC-IRMS.

When a substance (e.g., a compound) is synthesized, the incorporation of heavy isotopes into the molecules depends on certain kinetic conditions. This can lead to a marginal, still measurable shift in the isotope ratios in this substance. Differences geographically or synthetic conditions therefore produce different isotope signatures of the same substance. On this basis, different sources of contamination can be determined at a contaminated site.

Physical processes such as evaporation or sorption might cause changes in the isotope ratio, however, the impact of physical processes is mostly minor or negligible compared to degradation and, thus, does not influence the assessment of pollutant degradation based on CSIA in most of the cases.

Based on the information provided above, CSIA is a powerful tool that can be used to evaluate the extent of contaminant degradation versus non-degradative losses as well as “fingerprinting” contaminants for source identification and differentiation. When combined with molecular biological tools (Gene-Trac®) and advanced analytical testing and/or incorporated into treatability studies it can substantially enhance the understanding of potential sources as well as optimization of remediation processes and progress (see Dynamic Duo article in this issue for more information).