Legendary musician Neil Young coined the phrase “Rust Never Sleeps” in the late 70’s referring to relentless personal and societal decay. Neil wasn’t likely thinking about site remediation at the time but as Professor Paul Tratnyek pointed out in his May 2021 webinar, corrosion is what occurs when zero-valent Iron (ZVI) is used to treat contaminants. In this case “rust” is cleaning up our environment; fostering renewal, not decay.

When metals lose electrons, corrosion occurs. For ZVI, corrosion converts Fe0 to Fe2+ and Fe3+ with the liberated electrons reducing and degrading chlorinated solvents such as 1,1,1-trichloroethane (TCA) or perchloroethene (PCE), explosives such as TNT, pesticides such as DDT or promote immobilization of metals such as arsenic, chromium and selenium. The ability of ZVI to degrade a wide range of contaminants, and relatively low cost, has made ZVI the most popular in situ chemical reduction (ISCR) amendment. Other popular ISCR amendments include ferrous iron and sulfur salts, hydrogen sulfide and zero valent zinc (US EPA).

ZVIs Many Forms and Many Uses

ZVI was first deployed in the early 1990s in granular form in trench-based permeable reactive barriers (PRBs) for chlorinated solvent remediation. ZVI is often derived from milling cast iron products and metallurgic powders  and has been deployed in remedial applications in a variety of forms and formulations including: 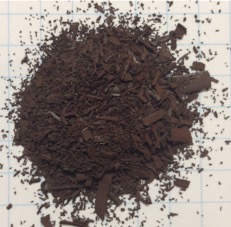 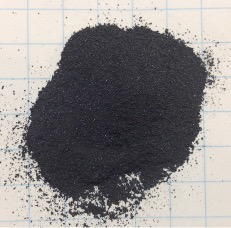 Figure 1: ZVI of different sizes have different reaction rates with millimeter scale typically the lowest, colloidal and Nanoscale the highest

ZVI Combined with Bioremediation – Two Pathways are Better Than One!

ZVI has the ability to dechlorinate under conditions that may be unsuitable for biological activity such as very low pH, metals toxicity or potentially toxic concentrations of chlorinated solvents. Furthermore, ZVI has activity for compounds that may not always be subject to rapid biodegradation such as carbon tetrachloride and chloroform (trichloromethane).

ZVI also has unique properties that make it synergistic with biological reductive dechlorination including hydrogen generation during the anaerobic corrosion of ZVI that leads to conversion of Fe0 to Fe2+ (Figure 2). Hydrogen, which is also produced by fermentation of organic electron donors, is the exclusive electron donor for reductive dechlorination of chlorinated solvents to ethene by Dehalococcoides. Reductive dechlorination pathways of chlorinated ethenes mediated by ZVI include both β-elimination and sequential hydrogenolysis, with the former pathway being dominant. This increases overall reaction rates and typically prevents generation of chlorinated breakdown products. Another advantage of ZVI is the generation of alkalinity in the form of hydroxyl radicals (OH–) reducing acidification which can be a challenge in bioremediation, particularly if pH is, or falls below 5.5 where most reductive dechlorination ceases. Lastly, dissolved iron created by ZVI corrosion, along with the generated reducing conditions, often lead to microbial-mediated creation of secondary minerals such as iron sulfides, magnetite and green rusts that are ISCR materials themselves. On the other hand, microbial processes may extend the ZVI remedial applicability by degrading compounds such as dichloromethane, chloromethane and 1,2-dichicloroethane which ZVI does not degrade directly. 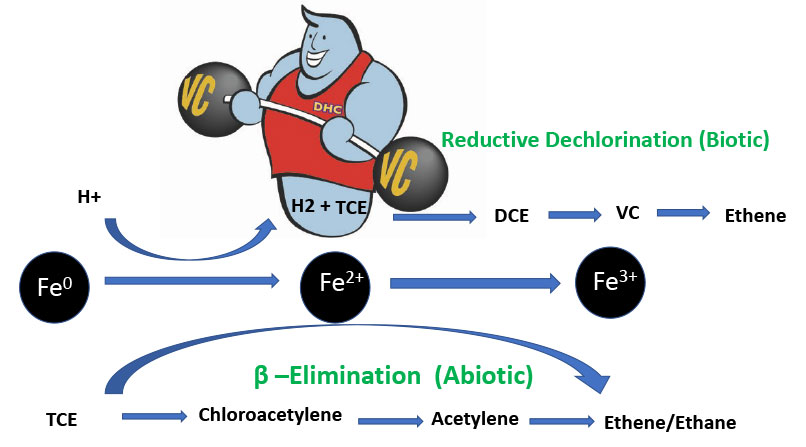 Figure 2: ZVI enhances chlorinated solvents such as TCE by abiotic β-elimination which has the benefit of not producing toxic breakdown products such as DCE and vinyl chloride. ZVI also enhances complete biological reductive dechlorination via hydrogen generation which is the sole electron donor used by Dehalococcoides (Dhc).

The overall compatibility of ZVI with bioremediation means it can be used in combination with fermentable organic electron donors and there are several products that leverage both biotic and biotic reduction processes. At a site in Portland Oregon, a ZVI-carbon blend product was used as the remedial product at the largest ever application of dechlorinating culture KB-1®, where  PCE concentrations in a DNAPL source zone were reduced from 11,000 µg/L to 5 µg/L in 6 months after injection (Peale et al, 2010). The Portland site had strong evidence of both abiotic and biotic dechlorination including the detection of ethane, ethene and a robust Dhc population contributing to the rapid mass reductions observed. This project demonstrated the ability of combined ISCR and bioremediation approaches to quickly reduce significant solvent mass in situ.

“Five months following completion of a PRB and supplemental treatment zones composed of a ZVI-carbon blend product  and KB-1…The TCE percent mass reduction ranged as high as 99.1 percent in the injection zone, and 98.6 percent downgradient”

Iron corrosion chemistry and biology also intersect through in situ biogeochemical reduction pathways which involve iron sulfides and bacteria. These pathways are sometimes referred to as Biogeochemical Reductive Dechlorination (BiRD) and involve the reaction of Fe2+and the bisulfide (hydrogen sulfide) anion (SH–) which produce ferrous sulfide (FeS). Fe2+ and sulfate can be present naturally, or can be added in  addition to ZVI, as ferrous sulfate, which is more soluble and easier to inject in most cases.

Figure 3 summarizes the reduction Fe2+ and sulfate and their precipitate as ferrous sulfide (FeS) which reacts with a wide range of compounds including and metals and chlorinated solvents, such as carbon tetrachloride (CT). CT is most rapidly converted to chloroform by abiotic pathways (He et al. 2015) although co-metabolic pathways can also play a role. Commonly used electron donors such as lactate or emulsified vegetable oils that ferment to acetate can be added to feed SRB and metal reducers and also produce hydrogen to fuel Dehalococcoides. 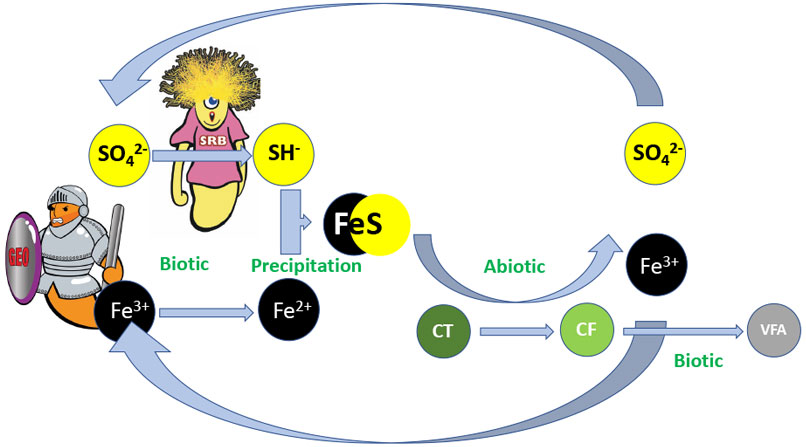 An interesting application of the biogeochemical reduction process are so called “in situ permeable reactive barriers” (He et al., 2015). Figure 4 outlines an in situ PRB application using injected ferrous sulfate, plus electron donor to encourage FeS precipitation and abiotic degradation of contaminants as they flow through the FeS zone. The PRB could also enhance biotic dechlorination, due to the addition of electron donor, and could be combined with bioaugmentation to add Dhc if needed. An “in situ PRB” is easier to install because the trenching, often required for a conventional ZVI-PRB, is not required. 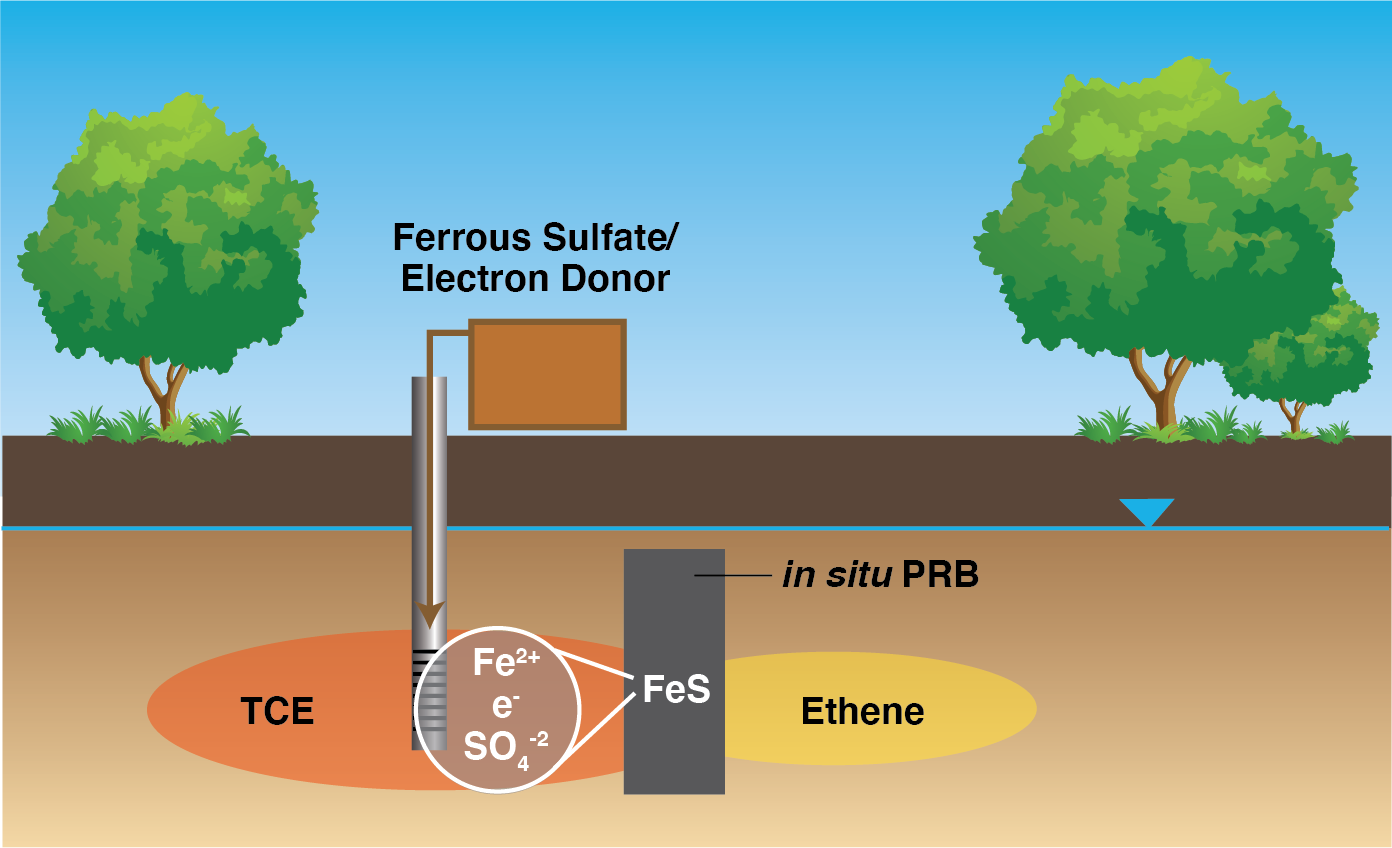 Figure 4: Schematic of in situ PRB concept created through injection of ferrous sulfate and electron donor which produces  FeS which then reduces TCE to ethene by abiotic and potentially biotic pathways.

Reduced Iron compounds, including ZVI and ferrous iron, are available in a wide variety of forms and formulations and interact with contaminants and also enhance biological process. Reduced iron compounds have potential to treat challenging remediation problems including high contaminant concentrations, decreasing toxic or inhibitory compounds, and overcoming challenging geochemistry. Due to the complex nature of these iron mediated processes, treatability testing is often of benefit, see this issue’s  Technology Spotlight– ISCR Column Studies for more information on how treatability testing can help you better understand and maximize the potential of reduced metals to clean up challenging sites.

SiREM would like to Thank Andrzej Przepiora of Geosyntec Consultants and Prof. Paul Tratnyek of Oregon Health and Science University for their contributions both direct and indirect to this article.