Monitored natural attenuation (MNA) can be a cost effective and sustainable remediation strategy, as a sole remedy, a polishing step, or downgradient of active remediation in source zones. The ability to effectively assess contaminant mass degradation rates and mechanism(s) is of clear benefit to achieving stakeholder and regulator buy in for MNA remedies. A variety of tests can be employed in evaluating natural attenuation (NA) ranging from analytical chemistry methods that quantify contaminants (e.g., volatile organic compounds) to measurements of geochemical parameters that provide evidence that conditions are appropriate for degradation processes. These are known as primary and secondary lines of evidence for MNA respectively. Tertiary lines of evidence include compound-specific isotope analysis (CSIA) and molecular biological tools (MBT) that are particularly useful for understanding the mechanism(s) of concentration declines at MNA sites. When combined, the resulting data strengthens the case that NA is either occurring or not. 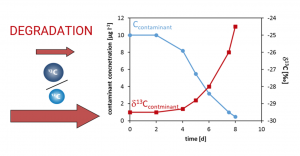 Figure 1: Declines in concentration (blue) could be due to dilution, sorption or degradation. Changes in isotope ratios (δ 13C[‰]) as measured by CSIA (red) verifies contaminant degradation processes, a critical finding for MNA remedies.
-Figure complements of Isodetect GmbH

CSIA is applicable to a wide range of contaminants such as chlorinated solvents and hydrocarbons, and can distinguish and quantify bond breaking processes over non-degradative losses, such as dilution, dispersion or sorption, which do not shift isotope ratios. CSIA also has the potential for estimating long-term degradation rates. CSIA technology is dependent on the preferential degradation of 12C containing molecules compared to slower degradation of 13C molecules, which tend to have stronger bonds leading to depletion of 12C and enrichment of 13C. CSIA results are expressed in units of δ13C [‰] with less negative values indicating increasing degradation of the parent compound (Figure 1).  For example, if a δ 13C [‰] of -29.5 for benzene is measured in the source zone and a δ 13C [‰] of -24.5 was measured downgradient, this suggests that benzene was degraded as it moved through the aquifer. A very useful characteristic of CSIA is that integrates isotopic changes that have occurred prior to the measurement. Therefore, if benzene were degraded very slowly over decades it may be difficult to determine this by measuring concentration alone, but, the cumulative evidence is detected in the isotope ratios uncovered by CSIA.  Furthermore, CSIA can be used to uncover reaction pathways, particularly Dual Isotope CSIA (e.g., 2H/1H and 13C/12C) that can help to identify pathways as aerobic, anaerobic abiotic, biotic or a combination of these.

CSIA integrates changes in isotope ratios over long time frames, therefore a slow contaminant degradation over decades may be detectable by CSIA

Molecular biological tools (MBT), including targeted quantitative polymerase chain reaction (qPCR) tests quantify specific biodegradative microorganism and functional genes whereas next generation sequencing (NGS) quantifies the entire microbial community (Figure 2). Both tests are based on the polymerase chain reaction PCR), the same DNA amplification technology that powers criminal forensic analyses, and which can detect minute amounts of DNA. The sensitivity of PCR-based MBTs is a major advantage for MNA assessments in that a very low abundance of a biodegradative microorganisms can be detected that may have only subtle impacts on remediation. For example, dechlorinating Dehalococcoides (Dhc) can be detected by targeted qPCR (e.g., Gene-Trac® Dhc) at an abundance as low as 103/L in groundwater but Dhc are not observed to be at “generally useful” rates of reductive dechlorination until the 107/L range as determined by an EPA study of NA sites.1 As a result, this means qPCR can be 10,000X more sensitive at picking up Dhc than evidence provided by analytical chemistry. This is a useful property for MNA which can involve slower and more subtle, but possibly still relevant, biological degradation rates especially if these are considered in combination with abiotic processes and over longer timeframes.

qPCR is extremely sensitive, detecting microorganisms at abundances well below where their impacts are easily decerned by contaminant declines or degradation product accumulation 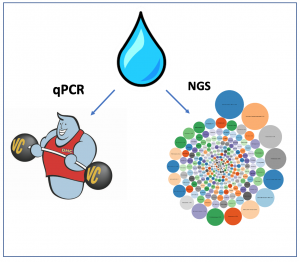 Figure 2: qPCR is sensitive and targets specific microorganisms (e.g., Dhc) or functional genes (e.g., vcrA). While less sensitive, NGS can identify hundreds to thousands of microbes in a sample. Both analyses are extremely useful for MNA assessments.

NGS can identify microorganisms involved in a wide range of biodegradation processes. While not as sensitive to individual microbes as qPCR tests, NGS has the advantage of casting a wide net based on universal PCR primers used that detect a wide range of microbes. For example, NGS could detect aerobic degraders of chlorinated solvents, reductive dechlorinators, sulfate reducers and iron reducers that support biogeochemical pathways mediated by metal sulfides, as well as acetogens known to support the vitamin B12 needs of Dhc. NGS can also be useful to confirm geochemical measurements, for example the detection of methanogens (obligate anaerobes) suggests that conditions in the aquifer are highly reducing supplementing ORP and DO measurements which can be biased by atmospheric oxygen. The holistic view provided by NGS helps to determine that multiple beneficial pathways are operating and can increase confidence that NA is effective.

CSIA and MBTs provide compelling data to answer questions including

Synergies between CSIA and MBTs come into play when CSIA methods are inconclusive but where the high sensitivity of MBT are used to increase confidence that observed shifts in isotope ratios are real when a candidate biodegrader is detected. Conversely, if there is 13C enrichment and known biodegrader populations are not detectable this may suggest that abiotic pathways are occurring.

“MBTs along with dual stable isotopes revealed a high complexity in degradation processes and played an important role to substantiate the natural attenuation of the plume”–Badin et al., 2016

The unique attributes of CSIA methods including the ability to integrate long term degradation and identify degradation pathways combined with the high sensitivity of MBTs, make these extremely useful tools for MNA assessments.