Previous Next
Making Vermont and a Dry Cleaner Site…Cleaner
Vermont State House in Montpelier, Michael Smith of VT DEC is supportive of bioaugmentation as a tool to help clean up some of the 1,300 hazardous sites in the state.

Vermont is known for the Green Mountains, fall colors, maple syrup, hiking trails and ski slopes. Despite its beauty, the state is not immune to groundwater contamination with 1,314 active hazardous sites in 2016, according to Michael Smith of the VT Department of Environmental Conservation (DEC). One such site, a former dry cleaner in central VT that ceased operating in 1994, had high concentrations of perchloroethylene (PCE) in groundwater due to improper historic waste disposal activities. There are sensitive receptors nearby including a day care.

Previous remediation approaches included in situ chemical oxidation (ISCO) in 2003 and 2004 followed by monitored natural attenuation (MNA). By 2010 it was determined that MNA was insufficient based on chlorinated volatile organic compounds (CVOC) concentrations in groundwater exceeding 80,000 µg/L in the source area and a resultant plume migrating downgradient of the site.

Site remediation challenges include low permeability geology and groundwater temperatures that often drop below 10°C during the VT winter, which may slow microbial activity. Furthermore, groundwater level fluctuations were observed to vary by over eight feet over the course of the pilot test including events such as the historic flooding observed with Hurricane Irene in 2013 that impacted groundwater levels and may have remobilized contaminant mass in the unsaturated zone.

The Impact of Bioremediation Becomes Clear 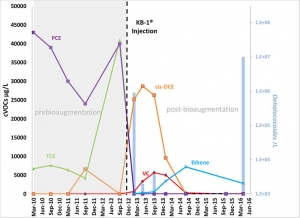 Prior to enhanced bioremediation PCE and TCE were predominant in source area well MW-2A, after bioaugmentation dechlorination to ethene was observed within 4 months

At the time of KB-1® bioaugmentation (November 2012) total cVOC concentration at source monitoring well (MW-2A) exceeded 81,000 µg/L. By February 2013 this concentration had decreased to 26,000 µg/L, mainly as cis-1,2-dichloroethene (cDCE), representing significant PCE and TCE reductions in four months. Vinyl chloride (VC) was first observed in February, 2013 and was detectable for just over a year. Concurrent with declines in VC, ethene was detected within four months of bioaugmentation, peaking at 7,000 µg/L in September 2014. The PCE equivalent of this concentration of ethene is dechlorination of more than 40,000 µg/L PCE in under two years.

Prior to bioaugmentation Dhc were not detected at all locations tested. In the winter following application of KB-1® the abundance of Dhc had initially risen then dropped in MW-2A and for a period were lower than commonly observed possibly due to groundwater level fluctuations.

Within 2 years of implementing enhanced bioremediation, total cVOC concentrations in the source area groundwater had declined more than 100-fold.

Based on detection of ethene, Dhc had rebounded by Autumn 2013 and a robust Dhc population (107 cells/L) was quantified by Gene-Trac® testing in April 2016. Dhc abundance of 1 x 107/L or higher is associated with high rates of dechlorination (Lu et al., 2006). Also in April 2016, Dhc were detected at offsite wells, at least 30 feet downgradient of the nearest injection location, indicating substantial spread of Dhc at the Site since bioaugmentation. With the ongoing detection of a robust and widespread Dhc population contaminant rebound is less likely.

PCE and TCE have remained below the detection limit at the Site since May 2014. The remedy has not only reduced concentrations in the in the source area but the effects have extended to downgradient wells that were not planned to be part of the pilot test. In the spring 2016 monitoring report, Lincoln Applied Geology noted that “the remediation pilot test had been extremely successful. Offsite wells outside of the original treatment zone even showed a marked improvement”. Based on the success of the pilot test further bioremediation injections at the Site have been delayed and may not even be required, saving the client money.

Michael Smith sees a role for bioaugmentation for sites in VT: “The KB-1® appears to have addressed a very difficult source area that other remedial technologies were not able to fully remediate. Being a small site, economics has been an issue. The KB-1® appears to be a viable tool at a reasonable cost for small sites. I am hoping to see this tool used more in VT”

“KB-1 appears to be a viable tool at a reasonable cost for small sites. I am hoping to see this tool used more in VT”

Based on the success of the first KB-1® bioaugmentation test in VT a second application at a commercial site in Burlington, VT was implemented in 2014 where the plume has been stabilized and is no longer migrating offsite according to Beth Erickson of Lincoln Applied Geology. Other anaerobic bioremediation projects for chlorinated solvents in the state are currently in the planning stages. With any luck the Green Mountain state will be even cleaner and greener in years to come in part due to anaerobic bioremediation.