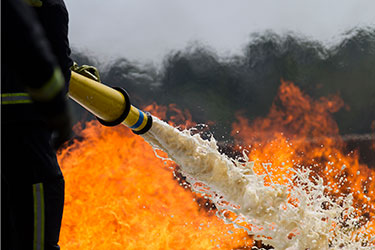 PFOS and PFOA were widely used in aqueous film forming foams (AFFF) used in firefighting, they have been replaced with less toxic shorter chain versions that may be more mobile in groundwater.

Structure of PFOS (C8HF17O3S) demonstrating the chain of fluorine (green) strongly bonded to carbon which creates its ultra-stable properties.

Perfluoroalkyl and polyfluoroalkyl substances (PFAS) are a large group of chemicals that were used for decades in numerous industrial applications (e.g., fire-fighting and metal plating foams, aviation hydraulic fluid) and consumer goods (e.g., stain repellent for clothes, furniture and carpets, and non-stick coatings). Perfluorooctane sulfonic acid (PFOS) and perfluorooctanoic acid (PFOA), both eight carbon perfluoroalkyl acids, are the most infamous examples of these toxic and carcinogenic compounds.

As a result of voluntary phase outs and the EPA PFOA Stewardship Program, eight major chemical manufacturers in the US committed to eliminate the use of PFOA and PFOA-related chemicals in their products and related chemical emissions from their facilities by 2015.

The widespread use of PFAS substances has led to their listing as emerging contaminants. The US EPA included PFOA and PFOS among the contaminants that public water systems are required to monitor under the third Unregulated Contaminant Monitoring Rule (UCMR 3) in 2012. Results of this monitoring effort are updated regularly and can be found on the publicly-available National Contaminant Occurrence Database (NCOD). In 2014, the USEPA established a health advisory level of 70 part per trillion (ppt) for combined PFOS/PFOA while drinking water MCLs are yet to be established.

Challenges and Options for Analysis and Remediation of PFAS Compounds

Chemical analysis of PFAS presents numerous challenges including the wide variety of these compounds, potential for blank contamination (they are everywhere) and the low detection limits required. The analysis is performed using liquid chromatography and electrospray mass spectrometry; EPA method 537 is the standard for drinking water analysis. Commercial labs have associated methods for analysis of other media (e.g., soil, sludge and sediment).

The ultra-stable and inert chemical structure of PFAS and the sheer number of related PFAS precursors make them challenging targets for remediation. While biodegradation of some forms of perfluorinated compounds have been reported, it is typically incomplete 1. In situ chemical oxidation of PFOA using heat-activated persulfate has been reported but in the same study, PFOS was not degraded2.

Removal of PFAS from soil and water by sorption technologies is in use and is being improved with research and development. Commercial sorption products (e.g., RemBind™) can reduce the leachability of PFOS & PFOA in soil and to adsorb these compounds from groundwater. PerfluorAd™ is an ex-situ technology developed by Cornelsen Umwelttechnologie in conjunction with the Fraunhofer Institute for Environmental, Safety, and Energy Technology that precipitates PFAS from solution followed by a simple sedimentation process and particulate filtration captures the separated PFAS (tersusenv.com).

While there is much to be learned about the remediation of PFAS compounds, laboratory treatability testing is a valuable tool to demonstrate, optimize and provide proof of concept verification for remediation approaches and commercial products for soil and groundwater impacted by this challenging class of emerging contaminants.

For more information on laboratory treatability studies for PFAS or other compounds contact
Sandra Dworatzek (sdworatzek@siremlab.com) at 1-866-251-1747/direct 519-515-0839.