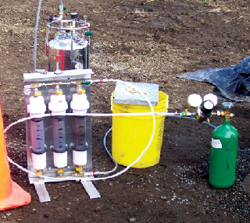 A trichloroethene (TCE) release at the site in the early 1980s led to concentrations of TCE and cis-1,2-dichloroethene (cDCE) as high as 592 and 90 milligrams per liter (mg/L), respectively, where TCE dense non-aqueous phase liquid (DNAPL) was suspected to be present. The contaminated zone ranged from 50 to 110 feet below ground surface (bgs) and was located adjacent to a river.

Bench scale treatability and field pilot studies demonstrated that in-situ chemical reduction (ISCR) – enhanced bioremediation, including KB-1® bioaugmentation, was the most efficient treatment approach. The full scale implementation was an expansion of a successful pilot study conducted in 20061 and consisted of a 150 foot long biobarrier amended with an electron donor and KB-1®. Approximately 200 injection points were used to inject 270,000 kilograms of electron donor and 2,000 liters (L) of KB-1®. Injection depths ranged from 40 to 112 feet bgs with four-foot injection intervals used to enhance vertical coverage. KB-1® was applied to each injection interval 7 to 14 days after electron donor conditioning of the aquifer produced suitably reducing conditions.

Within 6 months TCE concentrations were below federal MCLs (5 µg/L) at approximately half of the monitoring well locations and 98% of the estimated TCE mass was removed. TCE dechlorination products (cDCE and VC) were generated initially, followed by a rapid decline with observed increases in ethene. Chloride concentrations increased to a greater extent than expected based on the aqueous phase TCE concentrations, suggesting that TCE DNAPL dissolution had occurred. TCE half-life data indicated that TCE removal was a first order reaction with observed half-lives as low as 10 days.