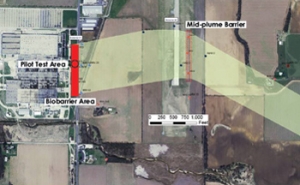 The site is a former manufacturing facility, where a historic trichloroethene (TCE) release created a plume 1,100 feet wide and 7,000 feet long averaging 3,600 micrograms per liter (µg/L) TCE, with a groundwater velocity of about 2 feet per day. Prior to biostimulation with electron donor, the groundwater conditions ranged from aerobic to mildly reducing and Gene-Trac® testing indicated the absence of dechlorinating Dehalococcoides (Dhc) bacteria. Electron donor addition in the absence of bioaugmentation resulted in the accumulation of the toxic biodegration product cis-1,2-dichloroethene (cDCE).

The goal was containment of the TCE source zone through establishment of a biobarrier adjacent to the facility beneath which the source zone is located. A bioaugmentation pilot test was performed to determine if KB-1® would improve the extent of dechlorination. The pilot test resulted in non-detectable concentrations of TCE, cDCE and vinyl chloride in less than one year.

Based on encouraging pilot test results, a full-scale biobarrier was implemented adjacent to the source zone. The biobarrier is 1,250 feet wide and utilized 106 direct push points to inject 60,000 lbs of emulsified vegetable oil electron donor. Once anaerobic groundwater conditions were established, 60 permanent injection wells on 15-30 foot centers were each bioaugmented with 5.5 liters (L) of KB-1®.

Two months after bioaugmentation complete dechlorination of tetracholoroethene (PCE), TCE and cDCE to ethene was observed across the biobarrier at the injection locations. Concurrent increases in dechlorinating Dhc bacteria were observed, increasing from near non-detect (103 Dhc/L groundwater) to extremely high concentrations of 109 Dhc/L after bioaugmentation. Within six months, the dechlorinating zone had migrated 45 feet downgradient where moderate concentrations of 106 Dhc/L were detected. Ethene was the primary degradation product in groundwater exiting the barrier, indicating a robust dechlorinating zone had been successfully established. Based on the success of the initial biobarrier, source zone remediation and a second mid-plume biobarrier were implemented in 2008.